I returned back to my favourite woods hoping that the mist would roll in. Eventually, it did. But it was after I packed up and started to walk away…

Here are some of my favourite photographs from the day. You can also join me on the day in the vlogs over on my YouTube channel – Adam Kappa

The forecast looked promising for another misty day out in the Lake District so I headed out to some woodland near Windermere in the English Lake District. When I arrived I was greeted with some nice weather, which for a change wasn’t what I actually wanted. My gut feeling was that it would change so I decided to go for a little wander in the mean time.

Whilst waiting for the mist to arrive I decided to try out some macro photography for a change. I had brought the 100mm F2.8 macro lens as well a ring flash and had a play around with the water drops that the recent rain had left scattered on the grass.

I found a patch in the grass which was covered in a spiders web which helped to highlight all of the water drops so I grabbed a photograph here.

Spider and the Fly

I didn’t find the water drops very exciting to photograph so I moved around until I found the spider. Underneath the spider, I noticed a fly casually sitting on one of the blades of grass below the web.

I was struggling to get enough light into the scene, even when using the flash so I opened up the aperture and focus on the fly. The spider turned into a bit of a blur leaving it more to the imagination. I’m not sure I like this, but it was fun to play.

Fallen tree in the mist

After getting some macro photographs I moved up to an area in the woods which has a fallen tree in a large opening. I was hoping that the mist would roll down and surround the tree adding more atmosphere to the scene.

Unfortunately, after waiting for an hour or so, nothing happened so I packed up my equipment and walked off into the woods. The rain came in really heavy so I got absolutely soaked, but the rain also brought in the mist. I ran back down to my spot and got ready for the photo again. Fortunately, everything lined up this time and I manage to get the fallen tree in the mist.

The front of the tree was lit perfectly as the tree canopy above was clear. The sunlight on the moss created a vibrant green foreground which contrasted with the dark trees silhouetted in the background which were covered in a light haze from the mist/clag.

These conditioned helped to bring the photograph to life and minimise the background distractions whilst at the same time adding some drama.

This photograph is available as a print in my online store

Mist rolling between the trees

After getting the photograph of the fallen tree I was pretty satisfied so I went for a wander with no expectations. I just walked until I saw something that caught my eye.

Up on top of the hill, you could see the mist rolling through the trees being backlit by the sunlight. I walked around until I found a clearing between the trees. The trunks of the trees also helped to frame the photo adding a dark border, leading you up into the mist 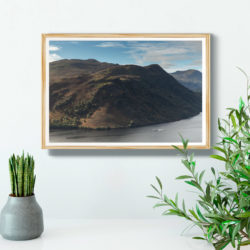 Ullswater Steamer Sailing Into The Sun. The Lake District

A Lone Tree At Hodge Close. The Lake District

The Lion And The Lamb. The Lake District