Snow Scattered On Bowfell And The Band Print From: £10.00
Back to products 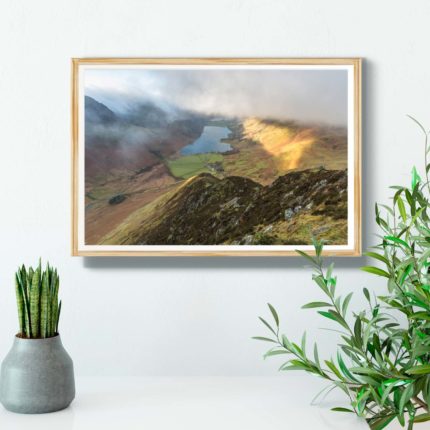 Sunlight Breaking Through The Clouds Onto Fleetwith Pike And Buttermere Print From: £10.00

Learn more about our products

The forecast was for a clear night so I decided to do something different and head up to Coniston Old Man to photograph the stars. I climbed up in the last of the sunlight watching the sunset over Goats water and then climbing the rest of the way by moonlight.

There was a light coating of snow on the last quarter of the walk, by snow I mean ice. Once I got to the top I realised that the photograph that I wanted over Dow Crag wouldn’t work as the gap between the top of the mountain and the stars was too big, plus there were too many clouds. Instead, I had a look at the view leading up to the top of the old man. The moon lit up the ground leading up the top and the Cairn stood out on the Horizon.

Coniston Water was glowing from the moonlight to the left and the sun was setting on the right. It wasn’t the view I had in mind but this was a lot better. Everything lined up at the right time Hoad Monument At Night As The Snow Falls Print From: £10.00
Shopping cart
close
We use cookies to improve your experience on our website. By browsing this website, you agree to our use of cookies.
Accept
Popular requests:
Start typing to see products you are looking for.